MEDIAORIGINAL
The Future of Film, Part I: US Film is Not a Growth Business
By Matthew Ball & Prashob Menon
Twitter Facebook Email
In April, Jeffrey Katzenberg shocked Hollywood when he declared that “movies are not a growth business.” It isn’t. But it can become one tomorrow.

In April, it was Jeffrey Katzenberg – not Arnold Schwarzenegger, George Clooney or even Jennifer Lawrence – whose words reverberated across Hollywood. The DreamWorks co-founder and CEO’s now-famous remark? “Movies are not a growth business.” Unsurprisingly, the industry elite were quick to attack – and did so in uncharacteristic unison at the Milken Institute’s Global Conference only two days later: Les Moonves (Chairman & CEO of CBS) declared that “anyone who is producing content and doesn’t see it as a growth biz is extremely mistaken”, while Jeffrey Bewkes (CEO of Time Warner) quipped that “maybe [it isn’t a growth business for Mr. Katzenberg]…DreamWorks doesn’t make many movies.”

Yet, Mr. Katzenberg was being neither pessimistic nor fatalistic. He was being honest. Movies are no longer a growth business in the United States – though they may appear to be. Over the past decade, the industry added nearly $1.7B in annual revenue domestically (representing a 20% increase). What’s more, the 1980s showed that a period of slow growth can precede one of rapid growth: 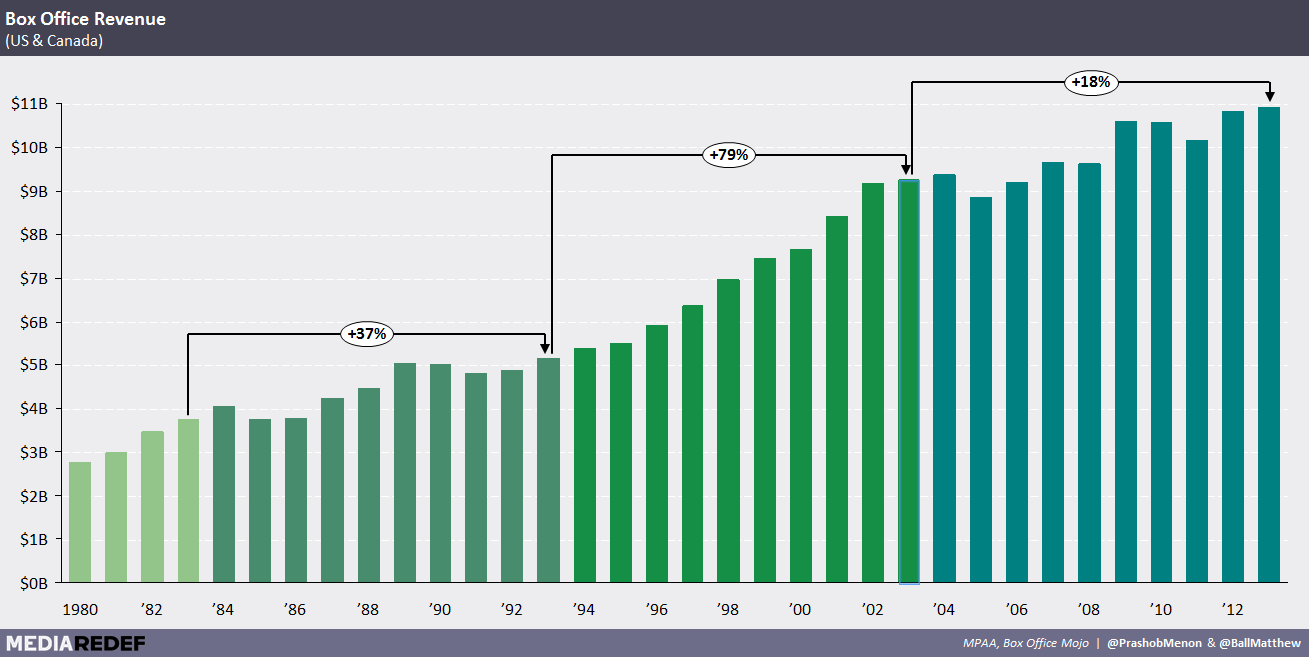 When one examines underlying industry metrics, however, a far more troubling trend begins to emerge. Film attendance per capita has been falling precipitously since 2002, with North Americans watching an average of 3.8 films per year in 2013 versus nearly 5 a decade ago. What’s more, this is actually an improvement. In 2011, the industry hit a 34-year low of only 3.9 films per year per person.

The persistence of this decline reinforces the controversial claim that audiences do not flex to the ‘strength’ (or number) of the films released in any given period. Instead, each film selected by a movie-goer comes at the expense of another.

Though population growth has partially offset this decline, at 0.9% per year it’s far from enough. North American audiences are rapidly substituting other forms of entertainment for the theatrical experience, a trend that’s likely driven by the strength of present-day television, the value of OTT video services, and the proliferation of console and mobile gaming. Not only are these assailants unlikely to leave any time soon, they are attacking the industry at both ends:

Since 2002, the number of “frequent moviegoers” (per the MPAA’s definition) has more than halved, dropping from 28% to 11% of all North Americans over the age of two. Meanwhile, the percent of the population that never watches a movie in theater has grown from 26% to 32%. The theatrical business is therefore suffering losses from its most valuable customers (frequent moviegoers), as well as its least (infrequent moviegoers). 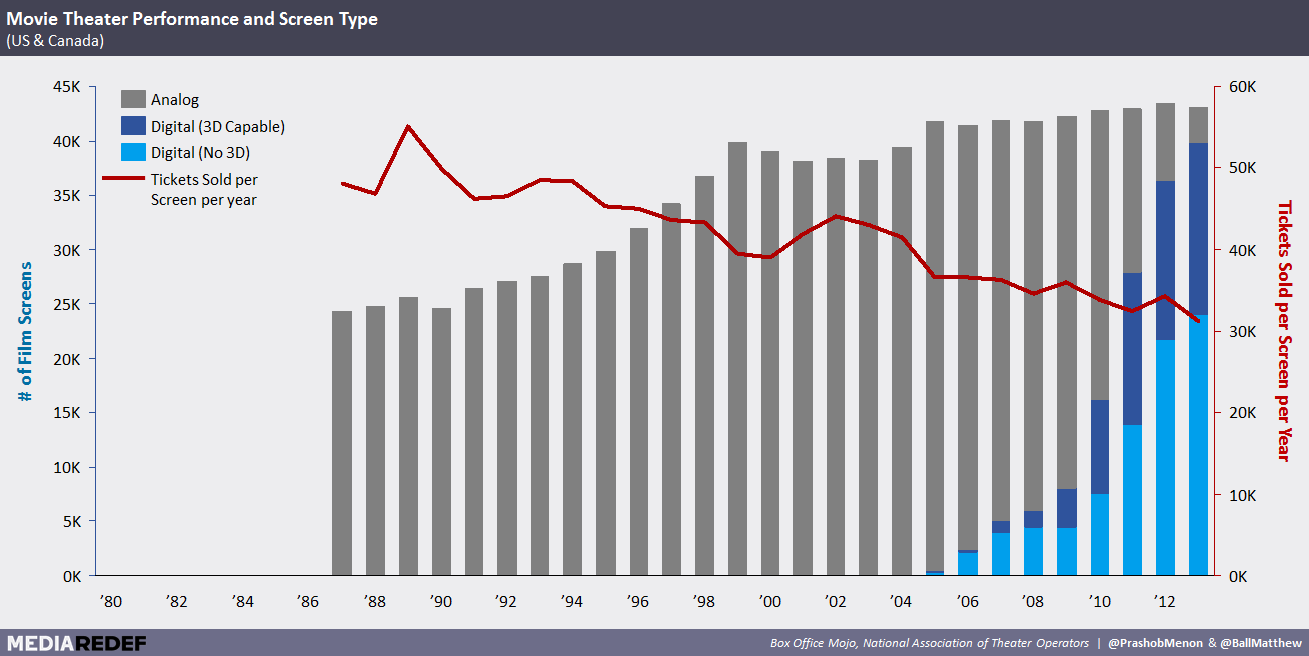 To make matters worse, it has never been easier for moviegoers to find a convenient theater, film, show time, or seat. Theater operators have also aggressively modernized their screens over the past decade, offering better quality picture and sound, as well as 3D. Yet this too has not been enough to reverse – or even sustain – film attendance. As a result, theater operators have seen a nearly 25% decrease in utilization, despite these investments.

To date, the industry has been able to insulate itself from declining demand by increasing ticket prices. The ramifications of this are profound. Film may be price inelastic today, but this trend is unlikely continue ad infinitum. At some point, the value per theatrical dollar will become so distorted that audiences will proactively substitute to less expensive channels. A reliance on inelasticity is also a surefire way to be disrupted.

It’s also important to recognize that Hollywood has spent heavily to drive attendance and ticket prices. Thirty years ago, distributors spent 19¢ on print & advertising for every $1 in box office revenue. Today, they spend nearly 3x as much. This increase is partly explained by increased theatrical competition, as well as the channel’s importance in platform filmmaking, but the trend casts a long shadow on the industry’s topline growth. 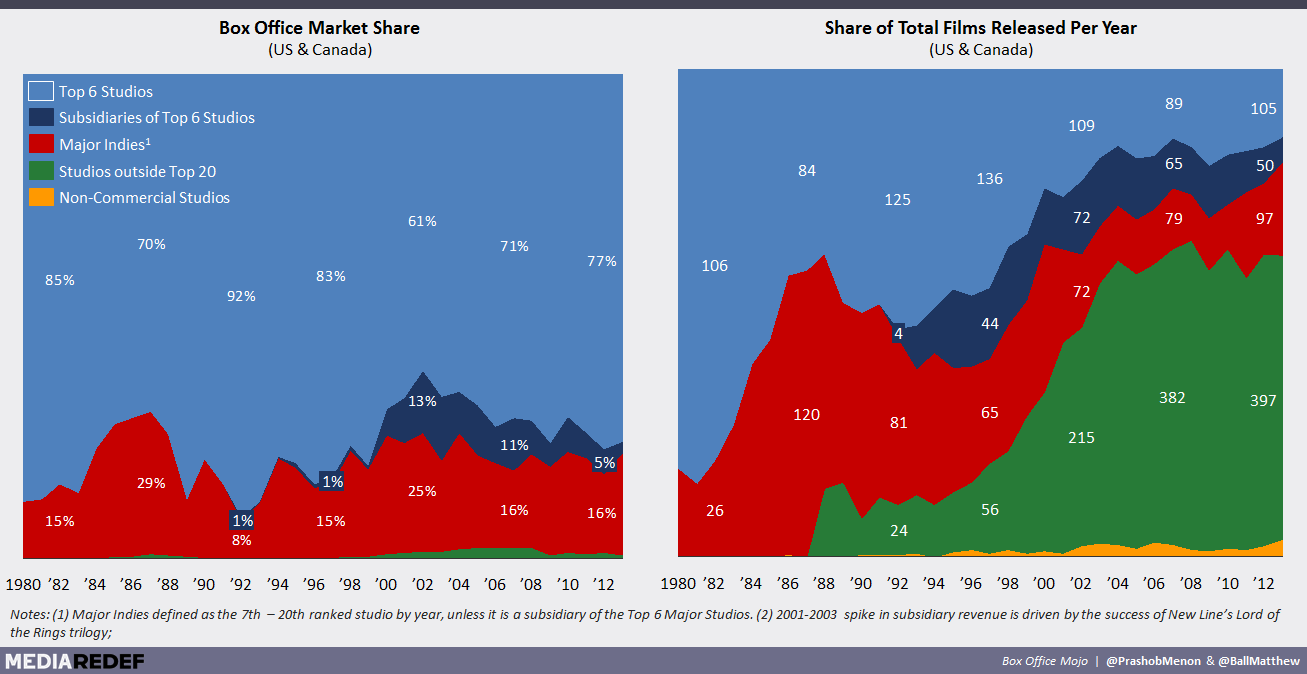 As demand for theatrical entertainment matured in the United States, each segment embraced a unique strategy: the Majors tightened their film slates, acquired and/or launched their own indie subsidiaries, and diversified film revenues away from the theatrical channel. Meanwhile, independents took advantage of falling production costs by massively expanding their collective output. Despite these diverse and multi-billion dollar tactics, neither segment has benefited from sustained market share gains – let alone re-catalyzed the theatrical channel overall.

Fortunately, Hollywood isn’t out of options. Over the coming days, we will lay out a series of strategies that Major and Independent film studios can use to stimulate underlying demand or create new value. Film isn’t a growth business in the United States today. But it could be tomorrow.

Part II: How the Majors can Drive Domestic Growth

Matthew Ball is a Director of Strategy & Business Development at Otter Media and leads Strategy & Originals at REDEF. All views are his own. He can be reached at matthew@redefgroup.com, followed on REDEF or on Twitter.

Prashob Menon is a Strategy Consultant in the Technology, Media & Telecommunications sector. He can be reached at menon.prashob@gmail.com or on Twitter.