"Pay-TV is the enemy. The first. And the last."
(HBO)
MEDIAORIGINAL
Netflix's Competitive Resiliency Is Here to Stay (Netflix Misunderstandings, Pt. 7)
By Matthew Ball
Twitter Facebook Email
Netflix has faced many challengers over the past decade, but growth hasn't slowed. Many more are about to come. But the effects are likely to be neutral at worst.

Because Netflix operates as a content business, it tends to be assessed principally on its content. This leads many to think that Netflix is perpetually on the precipice of being crushed or squeezed out of the market, as:

There are numerous problems with these critiques. Netflix’s “monetization advantage” is already so large that most suppliers are already struggling to take back their content (such as WarnerMedia with Friends and NBCUniversal with The Office). Second, it doesn’t really matter who makes Netflix’s shows, just that they’re watched. And even if Disney, Fox, WarnerMedia and NBCUniversal vertically integrate their entire businesses, there will always be tier 1 suppliers available – Viacom and Sony are both positioning themselves to be the world’s largest content producing “arms dealers”. It’s true Netflix’s content is aggressively branded as “Originals” and on average, comparatively lackluster. But Netflix is nevertheless able to build larger audiences with its B+ shows than others do with As, and to use its total output to smother out competitive releases. These are tremendous competitive advantages in the content business, even though it has little to do with “content” itself. Furthermore, Netflix is now developing several series from industry titans, Shonda Rhimes (who created three of the eight most-watched shows of 2014, 2015 and 2016) and Ryan Murphy (the most successful multi-genre multi-show showrunner in decades). If Netflix has a quality problem today, it’s unlikely to last much longer. And even then, the focus on “Quality” misunderstands both audience preferences and Netflix’s overall ambition – if the very concept of “Quality” exists at all.

But regardless of the importance of content (this is a good time to remind everyone Netflix is a tech company, not a content one), competition is coming. And accordingly, consumers will soon have more content available than ever before and more places to spend both their time and money. How will this shift the SVOD market dynamic, let alone affect Netflix’s user growth, pricing growth and viewership? Netflix CEO Reed Hastings says he isn’t really worried, that there’s space for everyone. What will happen?

To answer, let’s look at the last six years in the US.

In short, Netflix has spent more than six years becoming more expensive and reducing its content offering, all the while facing a barrage of new competitors (which competed traditionally, orthogonally and in new categories) and needing to convince increasingly hard-to-acquire customers to subscribe. And what’s happened? Only the rate of growth has slowed. In nearly every year-over-year quarter since 2012, Netflix has added the same number of subscribers as in the years prior year. And even engagement has remained stable at two hours per subscription per day, even though latter adopters should have dragged down averages. 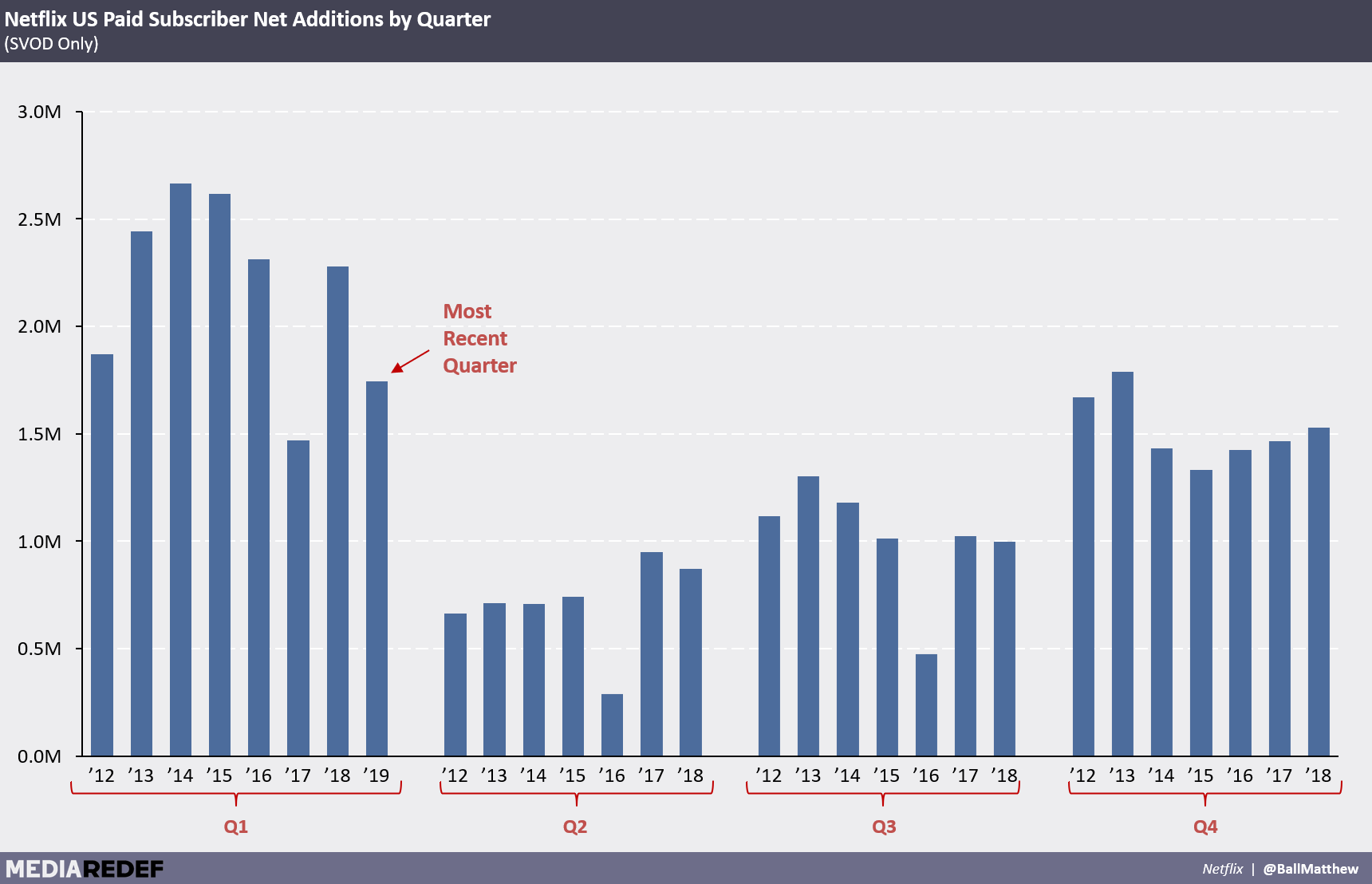 It’s no surprise the rate of growth has declined; the law of large number requires it (Netflix was growing at more than 100% per second back in 2007, after all). But notably, Netflix’s growth rate has actually been stable for more than eight quarters in a row (technically, it is actually up!). Netflix, in other words, is attracting just as many customers as they used to – on a rate and raw basis – despite the ever-changing content and competitive environment. 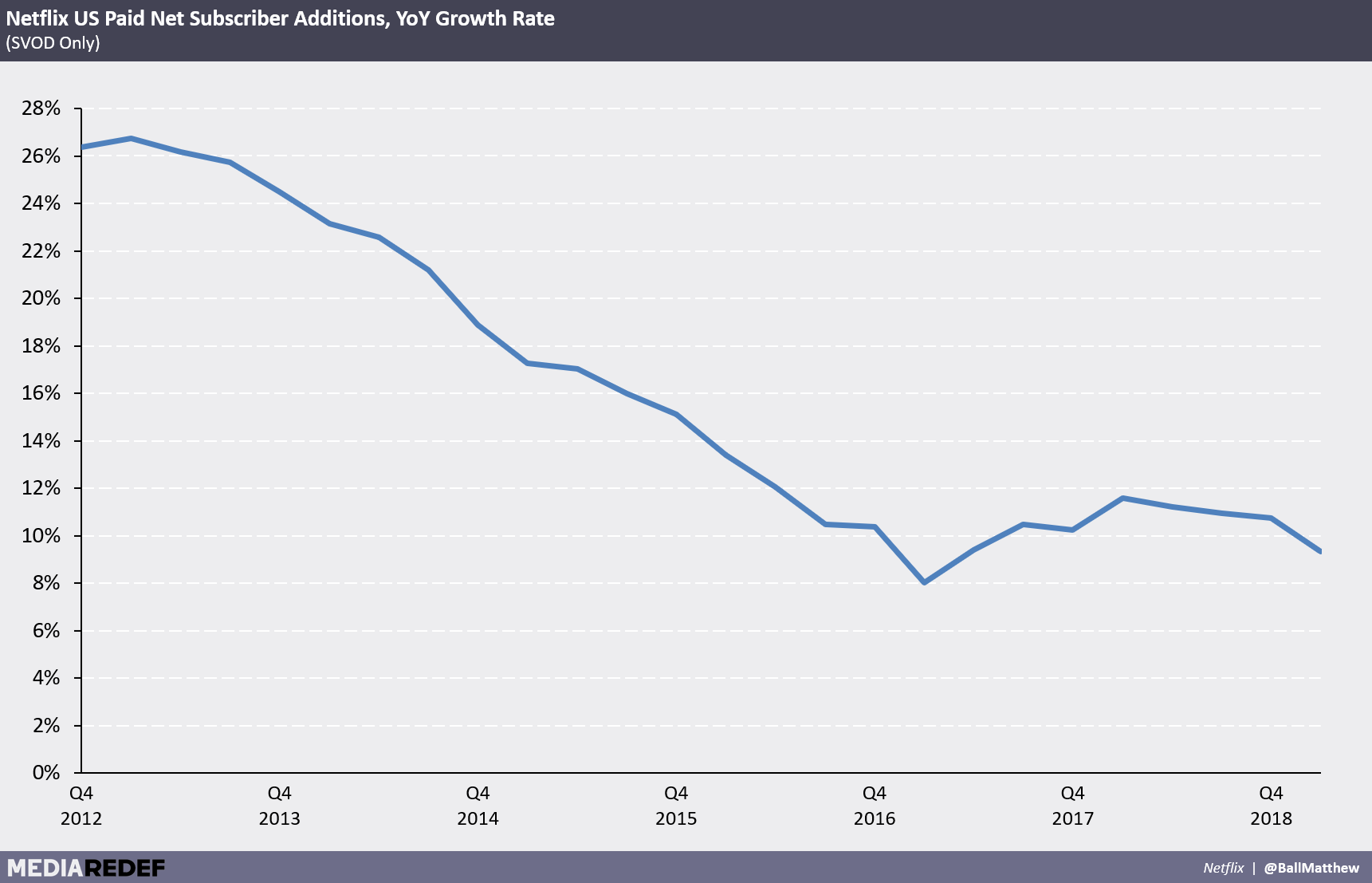 But the magnitude of this effect is only theoretical – and it is virtually identical to the logic that led many to assume Amazon would existentially destroy Netflix, or that Hulu’s access to Disney/Fox/NBCUniversal/TimeWarner content would, or that HBO Now would force Netflix’s pricing down and end its subscriber growth, or that Showtime, HBO and Starz all increasing their original content spend by 30-50% would suck up audience appetites for Netflix’s “crummy” content.

But none of this happened. Again, more competitors, cheaper competitors, more content buyers, more fragmented audience attention – none are good for Netflix per se. But the burden of proof is on Netflix bears, not bulls. History has already sided with the bulls – sided with Netflix’s resiliency.

While ongoing execution is critical to Netflix’s ongoing success, the durability of the company’s subscriber and watch time growth is, at least partly, a natural result of the market changes it set-off back in 2007. The traditional TV television industry (including broadcast, cable, satellite and fiber-based distribution) is huge – nearly 300MM Americans watch more than 5.5 hours of video per day, generating a combined $250B in annual subscription and advertising revenues. It’s also rapidly eroding. 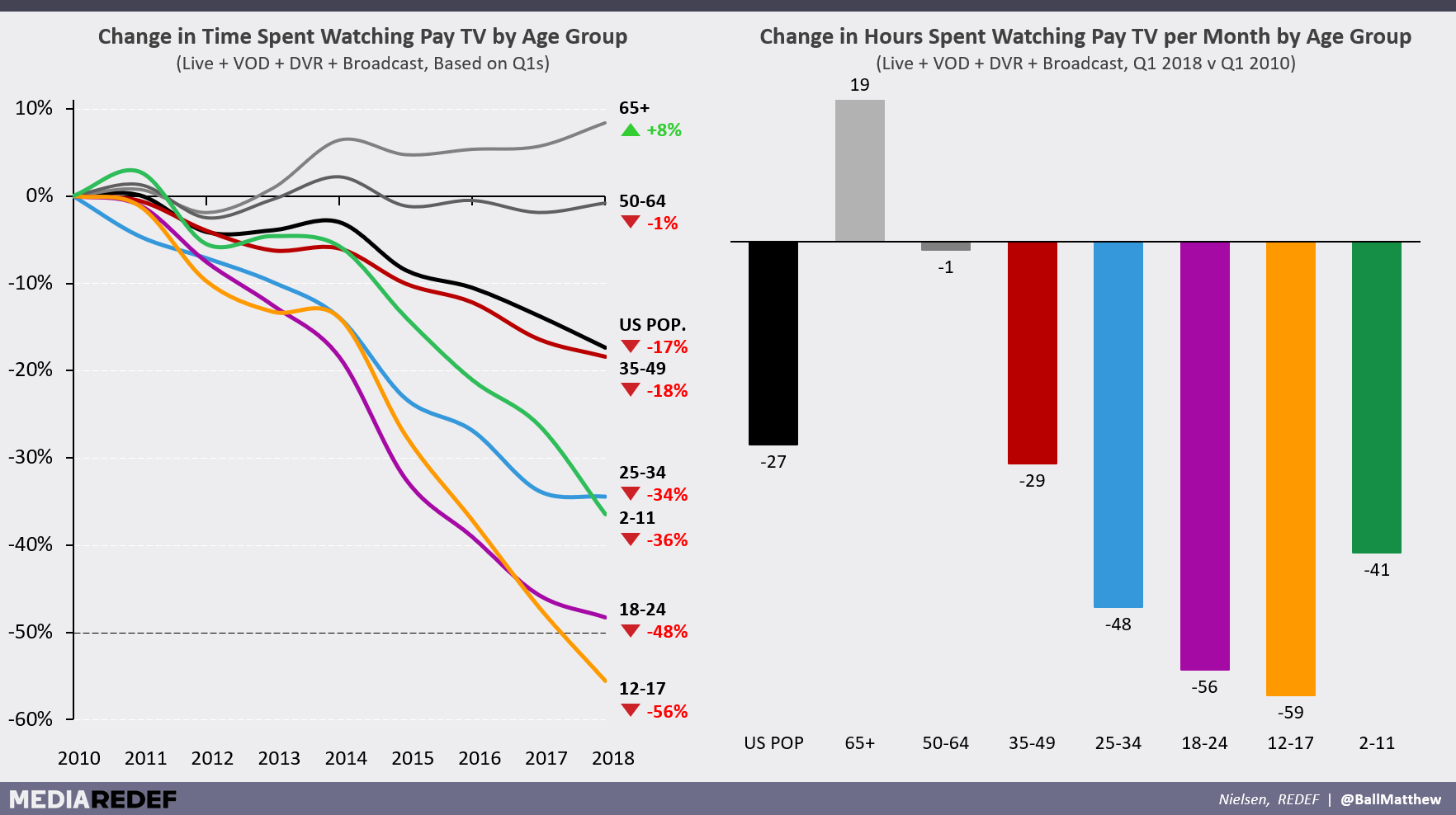 In raw terms, Netflix doesn’t need to capture much of this decline in order to continue to grow. But with its first mover advantage, record-breaking spend and market-leading user experience, it collects a plurality of this shifted time. And having seized only 10% of US TV time, there’s lots of headroom left, too. This dynamic also isn’t unique to Netflix, or media overall. E-commerce has become substantially more competitive in the past decade, yet Amazon’s growth has steadily continued. While it holds a ~45% share in e-commerce, the tech giant has only 5-7% of total retail spend (excluding items such as gasoline), of which 1-2% shifts online each year.

The enormity of US TV viewing habits also leads many to misunderstand Netflix’s “job to be done”. While some of the average American’s 5.5 hours of TV per day is highly valued “appointment television” time in the living room with the whole family, most of it is passively consumed in the background as the viewer cooks, unwinds or runs five miles on the treadmill. Netflix is pursuing all of this consumption, from romantic epics like The Crown, as well as lower-budget fare like Pawn Stars (though excluding sports). Many consider this consumption (and thus much of Netflix) to be disposable because we tend to view content like Game of Thrones as the least disposable content and it’s all competing services, such as HBO, focus on. However, this ignores user behavior and preferences, and thus Netflix’s value. Subscribers don’t churn away from Netflix after any one show stops airing, but many do pause HBO after a Game of Thrones season ends.

Netflix is focusing on, and succeeding, at providing a high volume of content – all non-sports content – easily and at a lower price. And after twelve years, Netflix has become the default source of non-sports video content, day-in-and-day-out. When a subscription service achieves this market position, it begins to hydroplane; its consumers don’t consider cancelling, they simply absorb the bill into their lives.

This position isn’t going anyway anytime soon. In fact, it’s not even under contention. In 2019, Netflix is expected to spend roughly $14B on content – a sum that continues to grow by 25% per year, or more than the entire programming budgets of HBO, Showtime or Starz. Furthermore, Netflix’s spend on non-sports television and film already exceeds that of any other media company. In fact, even when sports rights are added in, Netflix’s budget is beaten only by the now-combined Disney-Fox. The gap is even larger versus digital players. Netflix’s spend dwarfs that of Apple ($1-2B per year), Hulu ($2B, though the service is US-only), Amazon ($4-5B) and even Disney+’s long term targets ($2B in originals plus up to $6B in foregone licensing revenues). Amazon, which many analysts expected would financially capsize Netflix, is perhaps the most instructive. Over the past three years, both the percentage and total dollar differential between Netflix’s SVOD budget and that of Amazon has continued to widen – even though the latter has access to (theoretically) unlimited funding.

This spending gap helps reiterate the differences in Netflix’s ambition and role versus those of its peers. Netflix’s competitors are either trying to participate in the pay-TV industry’s $500B in annual global revenues as part of a bundle, or to offer a slightly reconstituted version of it. HBO, for example, presumes a world with many independent and successful SVOD services, and where various distributors re-package these services together as occurs in pay-TV today. Amazon, Apple, AT&T and Hulu are looking to be these bundlers and use their original+licensed content offering as an anchor upon which they can add-on services such as HBO, as well as linear pay-TV services similar to those offered by Comcast and Spectrum today. To this end, these services spend far less than Netflix because they are trying to access – and charge for – the content spend of their suppliers. For $36 per month, Amazon will give you Prime Video ($4-5B in spend) + HBO ($2B) + Showtime ($1.5B) + Starz ($1B), for example.

Netflix knows that competing services will always exist and be watched. Unlike music services such as Spotify, a video service can’t offer all content. But Netflix wants as much time as possible. And it reasonably concludes that if they spend much more than Showtime, and offer Showtime-style shows, in addition to offering much more content to many more subscribers, they can steal Showtime’s share. Further, it believes that its cost structure gives them an advantage versus Apple and Amazon, as the latter services’ bundle prices will always be much higher due to the need to pay margin to each network they bundle. Thus far, this hypothesis has played out. Netflix’s competitor is bundled television. And it’s winning by bundling massive volumes of content into its own service for a single $11 monthly fee.

“We compete with (and lose to) Fortnite more than HBO.”

With a view to Netflix’s at least-temporarily enduring growth, any consideration of how increased competition will affect Netflix needs to be put in the context of where it will be in 2020, if not 2021, which is when this competition actually kicks off. In 2019 alone, Netflix will likely add 1-2x more paid US subscribers than Disney, Warner, HBO, Showtime, Starz and Apple combined (variable due primarily to launch timing). Globally, it will do several multiples of these companies. In 2020, most of these services will be starting from 0MM subscribers. Netflix will have 190MM, and maybe $20B in annual content spend. And it won’t be until 2021 that most of these new competitors expand globally, launch anything more than the occasional original series, or regain rights to most of their catalogue.

This operating scale provides Netflix with powerful advantages. Audiences will only leave Netflix and add a new subscription when they can’t already find more to watch on Netflix, or the other subscriptions they already have. And Netflix is already the default subscription, with more content and usage than any other provider. Furthermore, believing these competitors will harm Netflix requires one to perform some mathematic acrobatics. I’m bullish on Disney+, but the service will simply not have the subscriber volume or content volume to meaningfully dent Netflix consumption. There are more than twice as many hours of House of Cards on Netflix than exists in the entire Marvel Cinematic Universe (much of which is on Netflix anyhow for years to come). These new services are more likely to further hasten the decline of Pay-TV than to eat away Netflix’s existing share. This doesn’t mean they won’t hamper further pricing growth or subscriber adds, but even then, history shows that’s much easier to theorize than to see.

You can reach Matthew Ball at mb.ball@gmail.com or @ballmatthew.

Part 1 of this series explained that Netflix spends far more on content than is typically reported. Part 2 explained how (and why) Netflix uses product and technology to economically outspend its competitors. Part 3 explained why Netflix risks so much. Part 4 explained why the term ‘Original Series’ if often a lie – and how Netflix uses this fact to beat its competitors. Part 5 explained why 2019 and 2020 don’t represent significant threats to Netflix despite the volume of new entrants and their impact on Netflix’s library. Part 6 explained that quality in SVOD is a distraction, if the concept is even real. Part 8 explains why Netflix won’t be toppled by a recession, its negative free cash flow, or its obligations.