In August alone, there was a record-breaking esports tournament prize pool of $20 million for Dota 2’s world championships, over $250 million in esports venture investments, and reports that more people viewed Twitch than the Olympics online in the United States. Despite clear evidence that esports have finally arrived, the growth of the top esports games appears to have already reached plateau.

As one might expect, the top esports games today all cater to so-called “hardcore gamers” – those who enthusiastically spend countless hours mastering complex game mechanics, engaging in competitions and experimenting in new concepts. To date, the games played by these gamers have typically been the fantasy genre: the gameplay, and capabilities are without real-world equivalents. However – and as is the case with most creative works – we believe there’s an inevitable ceiling to how many people will embrace the fantasy esports content. In fact, it appears we’re nearly there. Crucially, however, the unexpected success of the fantasy genre has overshadowed the immense popularity of another gaming genre: virtual sports. In the United States last year, virtual sports games represented three of the top ten games sold: Madden NFL 16 (2nd), NBA2K 16 (6th), and FIFA 16 (9th). And this was no one-year aberration.

The popularity of these games is easy to understand. Not only do they draw upon deep cultural passions and familiarity, they allow players to do things they’ve dreamed about doing since childhood – whether that’s bending it like Beckham or blocking like LeBron. If the esports industry wants to continue its unprecedented growth, we believe investment (and changes) in the virtual sports space will be critical.

Based on BRaVe analysis, 10 million monthly active users appears to be the magic number of users required to sustain the professional segment for a particular game. This creates a challenge for virtual sports games going forward as their business models are essentially based on fragmenting the player base. Most games, after all, are monetized through annual releases (i.e. FIFA 2016, FIFA 2017) – but this means that each year’s players cannot play with those who haven’t (or haven’t yet) bought the new iteration. The structural fragmentation of the virtual sports player base therefore prevents it from having 10 million monthly active users.

One way to acquire and maintain a large active player base is to shift from the business model of making a new game every year to operating these virtual sports as perpetually-updating subscription services. Compared to most games and genres, this model is particularly well suited to virtual sports as the game mechanics of these games tend not to vary tremendously from year-to-year. In general, players are mostly paying for slight graphic updates and new rosters. Still, serious challenges exist:

Without (or until) this change, however, virtual sports games cannot sustain a healthy professional segment. Fortunately, this represents only a small portion of the total eSports opportunity.

To date, most esports coverage has focused on two areas: fantasy genre games, such as Dota 2, and the professional segment of esports. While the latter will naturally monopolize attention (after all, it includes sold-out stadiums, six figure salaries for esports athletes, and broadcasts on ESPN), it represents only a small portion of the market. To put this in perspective, the most popular esports game, League of Legends, has roughly 870 professional players out of its 100 million monthly active users. 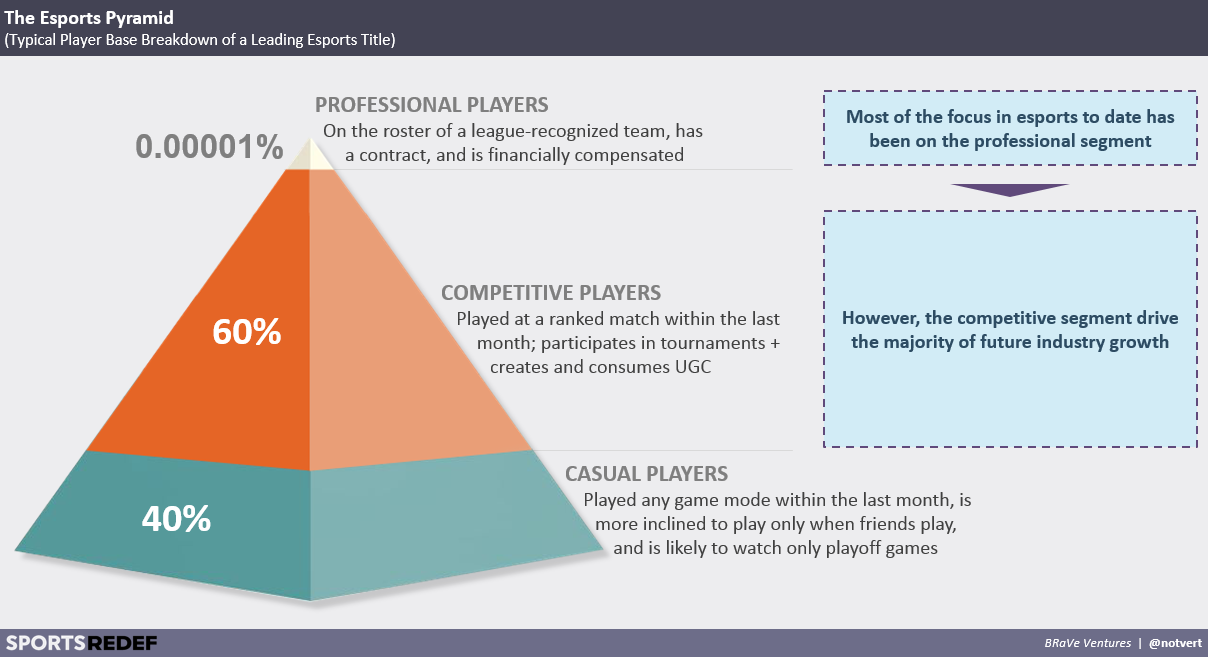 Were a traditional sport, such as golf, to focus only on professionals, the golf industry would be significantly less valuable, popular and notable than it is today. Accordingly, the virtual sports gaming business would do well to focus on the competitive segment of the pyramid – both in general and especially until they’re willing to change their sales model. While, there are many ways to define the competitive segment of esports. We define a competitive player as someone who has played a ranked match within the past month and engages with the game outside of the game itself (participating in amateur tournaments, creates and consumes user-generated content, and follows professional esports competitions).

Fortunately, focusing on the competitive gaming segment is exactly what game publishers are doing. EA launched its Competitive Gaming Division last December to focus on “making stars out of all of our players, looking at the base of the pyramid: 60-70 million young players who aspire to be part of eSports. The real action that we see, where we can help build community and build out the ecosystem, is at the base of that.”

In March, FIFA ran their annual Interactive World Cup (FIWC), which is the Guinness World Record holder for the largest video gaming tournament (2.3 million players tried to qualify). While EA has been running the FIWC since 2004, they are stepping up their game for next year’s competition. EA’s COO Peter Moore, who leads the Competitive Gaming Division, announced the $1.3 million prize pool Ultimate Team Championship Series at Gamescom. This tournament will culminate into the 2017 FIWC. Moore also crowned New Jersey native Frank “Stiff” Sardoni Jr. as the Madden 2016 Championship winner at E3, the annual video game conference in Los Angeles. Stiff won $20,000 and EA then announced a $1 million Madden tournament series next year.

One of the key barriers to the development of the competitive gaming segment is perception. Many sports fans, and pundits like Colin Cowherd, have lashed out at ESPN’s (belated) broadcast and acceptance of esports. Furthermore, there’s a significant gap between those who love/watch physical sports and/or play virtual sports games, and those who also support esports. Given the nature of the genre, this problem is unique to virtual sports.

With time, however, we expect this gap to shrink thanks to further investments made by game publishers, physical sports athletes and teams. Last year, 2K Games took their first steps into esports with its inaugural NBA 2K Road to the Finals tournament, which was hosted by NBA 2K cover athlete Kobe Bryant and former Los Angeles Laker Rick Fox. In 2015, Fox even bought his own esports team, Gravity (now ‘Echo Fox’) and in August, Shaq became a minority investor in team NRG and often waxes on the similarities between esports and his experiences in the NBA. In addition, Utah Jazz small forward Gordon Hayward picked up an esports sponsorship from HyperX, a computer memory and peripherals company, earlier this year and Net’s point guard Jeremy Lin has served as an analyst for Dota’s The International and recently signed a global endorsement for a Dota 2 team.

These efforts are paying off. Detractors like Cowherd have started to reconsider their stance on esports and more sports teams and team owners have entered the space. After all, it’s hard to tell The Black Mamba and Shaq that he’s wrong about what sports are or aren’t.

In some instances, the legitimization of virtual sports has become so significant that traditional sport executives are beginning to worry. Premier League executive chairman Richard Scudamore considers esports and social media bigger threats to soccer than other sports because that’s where young people are spending their time. However, the esports threat can be viewed as an opportunity as well. Two Premier League clubs, West Ham and Manchester City, have signed esports players in an effort to engage with their fans.

Teams are integral to engaging the competitive player base because they provide a geographical, often local, dimension to esports. Currently, esports teams typically have regional fan bases and are recognized as a North American team, a European team, a Chinese team, etc. Furthermore, the teams that extend their existing brands into esports like FC Schalke 04, a Bundesliga team, are counting on their existing fandom in traditional sports to partially crossover into their esports initiatives.

Beyond engaging the competitive player base, sports teams will provide more stability to revenue sources outside of digital in-game sales for esports teams: media / sponsorships and merchandise. Sports teams have fully-staffed professional sales teams that are able to bring in new sponsorships and/or expand their relationships with current sponsors. More importantly, sports teams know how to make stars out of their players. Esports athletes, like sports athletes, are interesting people with interesting stories. Sports teams will invest in shoulder programming that will help make esports athletes more relatable to your parents. And when that happens, significant sponsorship and ad dollars will start to kick in. For reference, the NFL generated an estimated $1.2 billion in sponsorships across 32 categories. Team sponsorships vary by game and by team, but esports sponsorships currently range between five and seven figures. Since the formation of virtual sports leagues are still in nascent stages, the teams themselves are able to capture sponsorship revenue in the near-term.