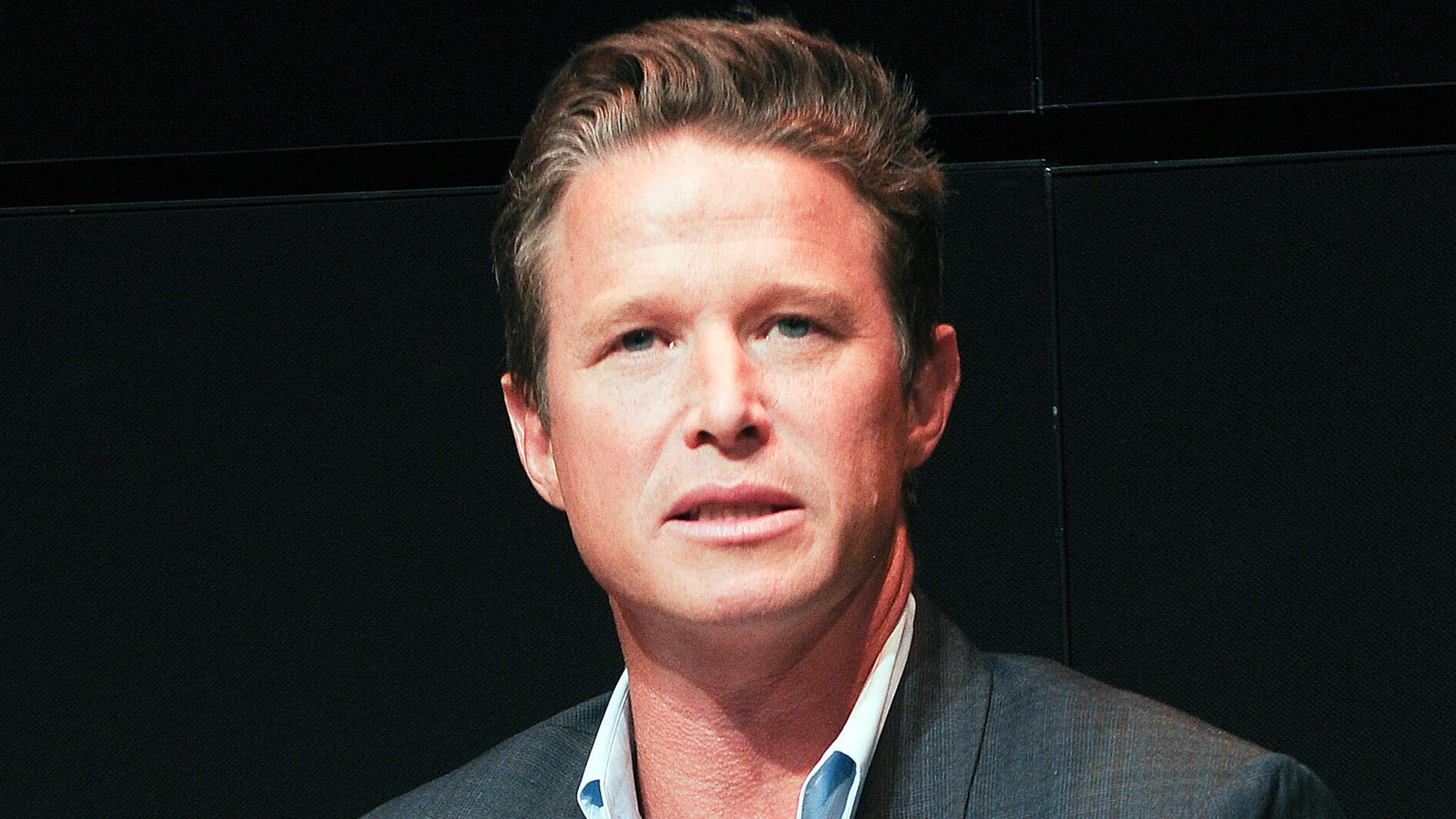 Billy Bush is a former host of “Access Hollywood” and “Today.”

As WIKIPEDIA explains, “A dye pack is a radio-controlled incendiary device used by banks to foil a bank robbery by causing stolen cash to be permanently marked with dye shortly after a robbery.” An analogy for those tarnished by the current administration.

On Oct. 7, 2016, the dye didn’t explode on the thief but on the security guard that let him get away. That was the day THE WASHINGTON POST’s DAVID FAHRENTHOLD broke the monster scoop known as “PUSSYGATE.” DONALD TRUMP having a lewd conversation with ACCESS HOLLYWOOD host BILLY BUSH.

The off-air recording was around 11 years old and never aired until that day. Within days of the story, Bush was fired by NBCUNIVERSAL. The other guy went on to destroy brand U.S.A. Go figure.

Why fire Billy, who had just joined the TODAY SHOW on Aug. 8? Presumably as a long-term plan to lead the show after MATT LAUER. Was the offense a career killer? At first, I was interested in the Trump of it all, the mechanics of the leak, and the firing. It led to bigger issues.

Billy may seem like an odd entry point, I get that. But I follow media for a living. This could be almost anyone in a similar circumstances

A fascinating situation for many reasons.

The nascent movements addressing sexual harassment, professional behavior, and accountability. The politics in the office and on the national stage. Internal rivalries. The fact that it was 11 years ago. The debate over degrees of bad. Mistakes or offenses? How a company deals with these issues. Who stays and who goes? Employee training. Should someone lose their livelihood as a result? How long should the punishment be? Do we forgive, rehabilitate, and improve?

We needed him to stop the robbery. We often look to the people onscreen to be better than us. Or protect us. Or do what we think we would have done. He was guilty of playing along. Some due to being in shock and letting it go on. Some giggles and a comment. Unacceptable then? We know it’s unacceptable now.

No one seemed to care much when he was fired. Maybe because he’s a Bush and resembles a good-looking college fraternity brother? Or if you’re someone who has put up with this for your entire life, you may have zero room for interpretation and tolerance.

Billy could and should have said something. Too often, people get away with Trump-like behavior because no one speaks up. A shocked, embarrassed guy was ambushed by a guest’s vulgarity on a show he worked on and, yes, he responded poorly. That’s my POV.

So I began asking myself questions. Going back to read coverage. Speaking to people familiar with the situation and the players. I also spoke to a few trusted executives for a view that I don’t have, as a writer and as a man. Trying to connect the dots so I can better understand.

Please bear with me because, let’s face it, I’m more SCOOBY-DOO than MISS MARPLE.

NBCU owns Access Hollywood, which had the footage since 2005. Why didn’t they air it then? Why did it resurface after 11 years of sitting in “the drawer”? Was NBC News combing its archives for Trump footage prepping for election pieces? NBC NEWS likely had a shot at it too. One of the biggest stories of year and they pass? NBC has tried to explain this.

This is the same group that RONAN FARROW suggested passed on the HARVEY WEINSTEIN story he later broke in THE NEW YORKER.

Is it that NBCU/NBC NEWS didn’t want to be portrayed as biased and pro-HILLARY CLINTON? And yet, they decide to let a light entertainment news show (Access Hollywood) break it?

But they didn’t break it, because The Post beat them to their own story.

In almost any media company, the video would have gone to the show’s lawyer. Then to the network lawyer and ultimately the general counsel of the entire company. They lock that stuff down. Something this explosive doesn’t stay floating around. They would ask questions related to the legality of airing. Whether or not Trump had the expectation of privacy.

So the story comes out (one has to cautiously suspect it was leaked from inside NBCU) and it’s massive. It even overshadows news that RUSSIA had tampered with the elections.

Then the story starts to spiral. Whisperings that women at NBC News won’t work with Billy Bush. The same division that put up with and then investigated sexual harassment at work and eventually fired MATT LAUER for it. The topic was fresh on the national and corporate stage, it’s all over culture, online and, at the time, little room for nuance or degrees. Lots of rumors that the hosts of the TODAY SHOW didn’t want Billy there as they had no hand in the hiring.

I also noticed that Billy got a big scoop while at the RIO OLYMPICS. He happened to run into RYAN LOCHTE fresh into accusations of lying about an alleged robbery. Big exclusive. Only to see the story taken over by LAUER later (Matt’s piece here).

Did they push the firing to avoid getting the tape’s “stink” on them? Or not wanting the competition? Or did they think he should suffer for his mistake? Or all of the above? Some have said to me that Billy didn’t belong there. The hire was ill-thought-out. He’s entertainment news, not hard news. Even if you agree, what does that have to do with it? That’s not the public reason they fired him.

Was firing him what he deserved?

Why not give Billy a shot and let him explain what happened on-air? Stand by him for a minute and let the audience decide? Is that a tough call in a world where sponsors are leaving during scandal? Sometimes online chatter is not the best barometer to react to.

Did they let him twist in the wind when the going got tough because the leak may have been from their own division? Their own colleagues? Or was it a statement given the climate, even if his offense wasn’t remotely in the same ballpark as those around that time. Did anyone care about different degrees?

No one I spoke to at NBCU thought Bush should have been fired for this. Maybe he was even told that before, during, and then on the way out the door. Almost all said he was caught up in the domino effect. Pretty amazing that all these smart people wouldn’t expect the effects. Or was it like DEEP THROAT said in ALL THE PRESIDENT’S MEN: “The truth is, these are not very bright guys, and things got out of hand.”

He wrote a NEW YORK TIMES OP-ED (please read the entire piece) in which he ended with:

“On a personal note, this last year has been an odyssey, the likes of which I hope to never face again: anger, anxiety, betrayal, humiliation, many selfish but, I hope, understandable emotions. But these have given way to light, both spiritual and intellectual. It’s been fortifying.

I know that I don’t need the accouterments of fame to know God and be happy. After everything over the last year, I think I’m a better man and father to my three teenage daughters — far from perfect, but better.”

I’ve spoken to a few executives from other media companies who said they would give Billy a chance, but don’t want to be the first. These are the times we’re living in. Some CEOs also said that they understood NBCU’s move even if they would not have done the same. The lack of accountability in the past needs to be corrected. Make a statement and also protect the company.

ABC took a chance on a far more controversial ROSEANNE so they could tell a narrative the country needed to hear. Roseanne delivered their greatest hopes (dialogue and ratings) and worst fears (racist tweets). They acted swiftly and decisively.

I don’t think it was some connected conspiracy. But when someone’s leak went wrong, they sacrificed him. That, too, is a human reaction. Not great in my opinion, but not unique. Even NOAH OPPENHEIM, then head of the TODAY SHOW (now president of NBC News) said in THE HOLLYWOOD REPORTER: “It was all moving so quickly that I don’t think there was ever a fully formed review of the ripple effects it was going to have.”

NBCU runs their shop how they want. And some applauded them for it.

And what about the leak? Personally, I think it was a public service to the country that had little effect on Trump and a big one on Billy. THE APPRENTICE tapes are still out there. Probably locked in a room and they threw away the room and the key.

I don’t know Billy well. I met him two times. Work is clearly a part of his identity. Many glanced over his situation likely because they thought Billy wasn’t substantial enough. Or they were fine with the end result as a lesson. There are more important things in the world, yes. I know this. The story is old news now. But the discussion seemed incomplete.

He got sent to the dungeon. Does he have to be in a dungeon forever? He’s been punished. Billy hasn’t worked since. Does he get another shot?

Maybe some empathetic people in our business who believe his repentance and agree on his appeal to audiences will give him a shot. Not the perch he had before, but somewhere to start. If so, what’s next for Billy? Something more independent? Something for the online digital video space?

Is it time to help and rebuild rather than expunge for a mistake in a moment? Many of us in the last year have revisited our behavior and questioned things we said or did with a new perspective. And with so much venom and negativity in our world today, how do we move to the middle to learn and find understanding? Zero tolerance doesn’t need to be retribution at all costs. The conversation that’s still missing? We have to do this together.

I am grateful for the discussion. I am grateful for friends and colleagues who pushed back at me and debated this piece. I am grateful an editor friend of mine said this first must be read by women who will tell me their truth. And a few did. Some admonished me and told me not to publish. Some said Billy had been treated unfairly. Some said there are many other more deserving who had zero culpability. One said I have a blind spot. I’m not all-knowing. A friend suggested I’m not entirely getting the pain and hurt around these issues. And I understand their point of view.

I’m thinking aloud. Still learning. Getting perspectives. I expect them all. From anger to empathy to disappointment and on. Most of all, I hope for debate. It’s so important at this time. This is an interesting topic to discuss. There will be more. All part of my process.

We are all judge and jury. The opinions on verdicts and sentences are varied. But now what? Is there room for parole? Do we, in fact, believe in second chances? Billy is ready to contribute in a positive way. Are we ready to accept him back?