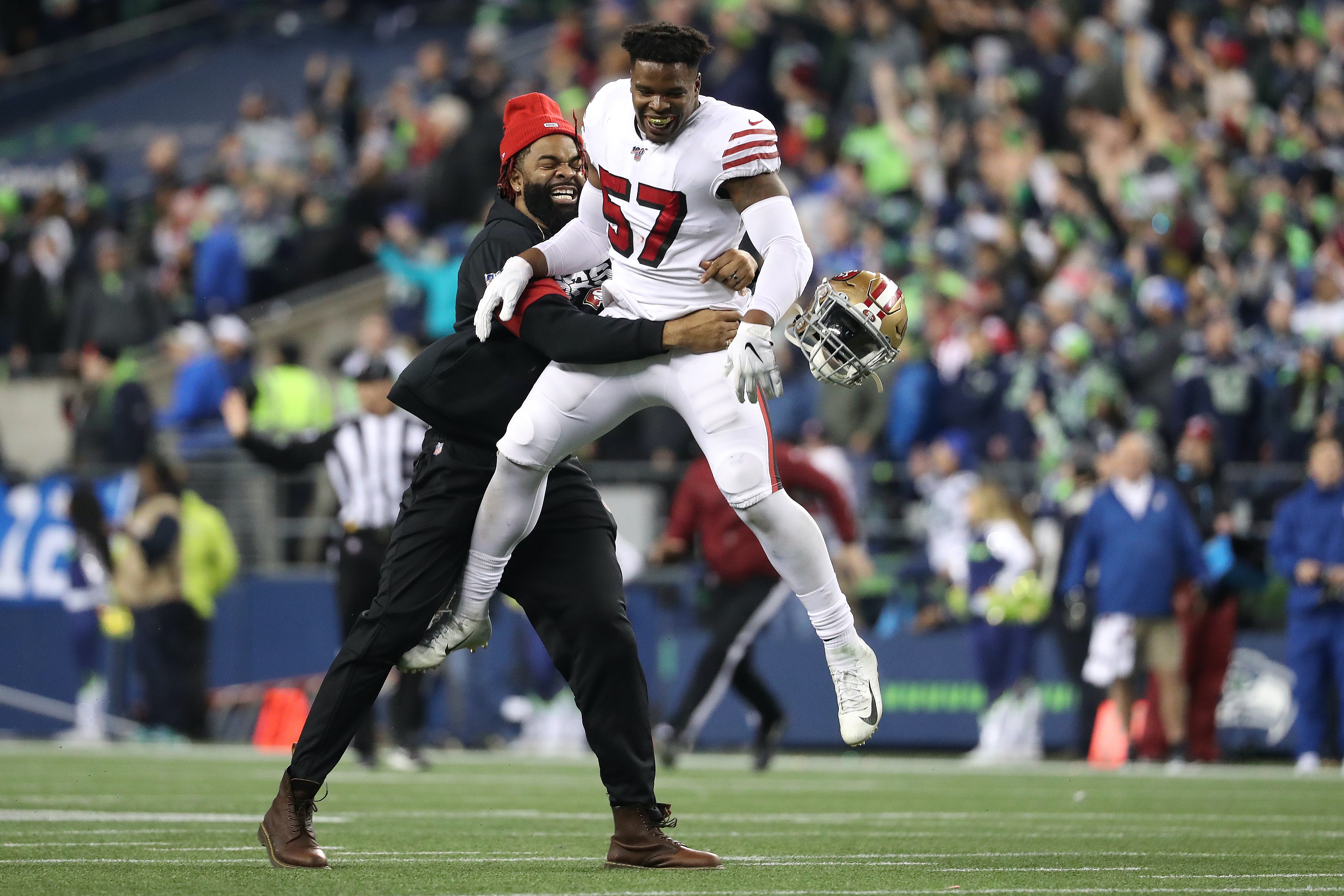 Dre Greenlaw #57 of the San Francisco 49ers celebrates with a teammate after stopping the Seattle Seahawks on fourth down in the fourth quarter to win the game 26-21. Dec. 29, 2019.

My father was a professional sports bettor. He concentrated on football, baseball and basketball. Both pro and college. He bet on numbers, not teams he loved. It was unemotional and he made a lot of money. But it was a weird profession if you were his kid and I never paid much attention. My dad passed away and now sports gambling is part of the fabric of America and we’re on the verge of real widespread legalization. Something he always thought would happen. So now I’m interested in it. I asked two friends, Patrick Keane and Chad Millman of The Action Network (which provides storytelling and analysis, real-time odds, in-depth betting information and the ability to track bets via its website and app) to give us a look at the space they cover and a sense of what’s happening and what’s going to happen in sports betting.

The week after Thanksgiving 2019, Giants owner Jonathan Tisch went on CNBC’s Power Lunch and said something that, 18 months earlier, would have sounded remarkable. When asked about the NFL’s ratings bump this season, Tisch credited, among several factors, the rise of legalized sports betting.

The truth is, of course, that sports betting has been a shadow market worth several hundred billion dollars for decades. And those bettors have had TVs for years.

But maybe Tisch’s opinion is influenced by the fact that New Jersey, home of his Giants, is the biggest new player in the betting market. MetLife stadium shares a parking lot with one of the state’s biggest sportsbooks, FanDuel’s Meadowlands location. Tisch could also be thinking about the boffo betting numbers coming out of the Garden State every month. New Jersey recently reported its 2019 numbers, its first full year in operation. And the results were staggering: $4.5B in handle, with $2B of that coming during football season. Need some context? Nevada, a mature market that is decades old with dozens of sportsbooks around the state, did $5B in 2018.

The fact an NFL owner went on television and praised sports betting for even a sliver of the league’s ratings bump is a testament to the rise of the industry’s influence overall. It’s been two full NFL seasons since the Supreme Court overturned the Professional Amateur Sports Protection Act in May 2018, giving states the right to legalize sports betting. Since then, there have been a flurry of big-money moves. Shortly after PASPA was overturned, European bookmaking giant Paddy Power bought US operator FanDuel in a deal that valued the combined business at more than $1B. In May 2019, Fox paid $236M for just under 5% of gaming company Stars Group to launch its own sports wagering platform, Fox Bet. Paddy Power and Stars merged in October, under Paddy’s parent company Flutter, in a deal that valued the two companies at $12B. Not to be outdone, just before the end of the year, DraftKings announced it would merge with Diamond Eagle Acquisition Corp as well as gaming platform SB Tech and go public, with an expected market value of $3.3B.

Meanwhile, sports betting laws have passed in nearly every part of the country. Twenty states have enacted sports betting legislation since the PASPA decision. Fourteen of those are currently taking bets and six others will launch in 2020, which means 48% of the population will have access to legal sports betting. Another 17 states are expected to approve and launch sports betting by the end of 2021.

That’s good news for operators, media companies and bettors. Since every state can make its own rules, it’s also created a roadmap for what works and what doesn’t.

New Jersey, for example, has allowed unfettered mobile betting from day one. That means any bettor who downloads an app from a licensed operator (such as DraftKings, FanDuel, PointsBet or William Hill) can bet from anywhere in the state. More than 80% of betting in Jersey is done via mobile devices, and it’s why the handle in the Garden State has grown so quickly. Other states that allow mobile betting include Pennsylvania, Iowa, Indiana, West Virginia, Oregon and Nevada. Every sportsbook implements geo-location tools to block out-of-state bettors.

A patchwork of obstacles—from battles with existing, land-based casinos to questions about how much should operators be taxed and where should the revenue go—has limited states such as Arkansas, Delaware, New Mexico and New York to allowing sports betting in physical locations only. If you think, in a mobile world, that doesn’t have an impact on how much revenue states can drive, consider this: In a piece about sports betting in New Jersey, Esquire’s David Hill reported that 44 percent of all mobile bets in the state are made within two miles of the state border. The train platforms in Hoboken are suddenly hip.

For many years, the dollar figures used to define the annual, illegal sports betting market have been $150B to $400. Now that we’re starting to see real numbers—north of $15B in handle from legal states since June of 2018, according to Legal Sports Report—operators, leagues, media companies and fans have spent most of that time talking about two things: 1. This is the biggest revenue opportunity for sports since the dawn of the internet; 2. How do we maximize our piece of the pie?

For almost everyone in the sports universe, the first NFL season After-PASPA in 2018 was mostly investigative. In season 2 A.P., 2019, all the key players in the market tried to define their position. ESPN launched the Daily Wager in the spring and did a motherlode sponsorship deal with Caesars. Bleacher Report tested the waters on OTT and on social with B/R Betting branded content and, wait for it, a deal with Caesars. Fox continued with its daily show, Lock It In, and launched FoxBet. NBC debuted a radio show, The Daily Lines, which is simulcast on several of its regional networks. A couple of those regional networks also broadcast secondary feeds of local games that highlight betting metrics, dubbed “Betcasts.” The NBA’s Washington Wizards, for example, debuted an alternative broadcast in January 2019 that features graphics of real-time box scores, updated odds for which team would win and a prediction game for fans to guess what would happen next (e.g. “Who will be leading with five minutes left?”).

In May, seeming to speak for media heavyweights everywhere, ESPN president Jimmy Pitaro told Recode’s Peter Kafka, “I think it’s fair to say this has become more of a priority.”

The new audience each of these media monoliths reaches might not yet be, as Tisch suggests, at the scale that drives tangible, measurable increases in national TV broadcasts. But there’s no doubt an insatiable, growing, mobile appetite for all things sports betting.

We see it every day at The Action Network. On a weekly basis we have hundreds of thousands of users manually inputting an average of 1.4M bets into our app. In the same way so many people use FinTech products to manage their money, Action users can keep track of every bet they make, analyze what’s working and better understand their habits. Bet tracking doubled from the end of 2018 through the end of 2019. Overall, our subscription base grew 114% year-over-year, with our low-priced tier ($60/year) growing 139%.

We’re still a tiny player compared to the whales in Bristol, Atlanta, Stamford and Los Angeles. But the numbers support a truth that Tisch was getting at: The audience of sports fans is becoming smarter and savvier much faster than expected. The language barriers (spread, total, moneyline, sides, props) have been easier to get over with the increase in sports betting info across all outlets and, most importantly, access across more states.

We’re long past the debate of whether or not this is good or bad. It just is. And what Tisch, his fellow owners, The Action Network, every other media company and every operator learned in After-PASPA Year 2, is this: The audience is ready.

Patrick Keane is CEO and Chad Millman is chief content officer of The Action Network, which provides storytelling and analysis, real-time odds, in-depth betting information and the ability to track bets via its website and app.